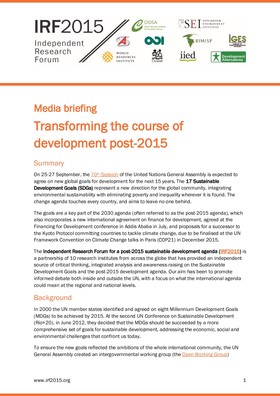 On 25-27 September, the 70th Session of the United Nations General Assembly is expected to agree on new global goals for development for the next 15 years. The 17 Sustainable Development Goals (SDGs) represent a new direction for the global community, integrating environmental sustainability with eliminating poverty and inequality wherever it is found. The change agenda touches every country, and aims to leave no-one behind.

The goals are a key part of the 2030 agenda (often referred to as the post-2015 agenda), which also incorporates a new international agreement on finance for development, agreed at the Financing for Development conference in Addis Ababa in July, and proposals for a successor to the Kyoto Protocol committing countries to tackle climate change, due to be finalised at the UN Framework Convention on Climate Change talks in Paris (COP21) in December 2015.

The Independent Research Forum for a post-2015 sustainable development agenda (IRF2015) is a partnership of 10 research institutes from across the globe that has provided an independent source of critical thinking, integrated analysis and awareness-raising on the Sustainable Development Goals and the post-2015 development agenda. Our aim has been to promote informed debate both inside and outside the UN, with a focus on what the international agenda could mean at the regional and national levels. 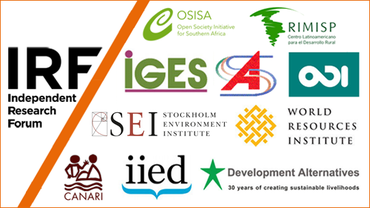 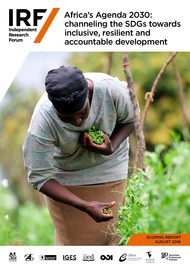 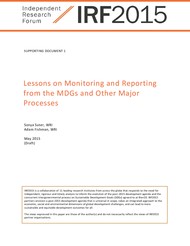 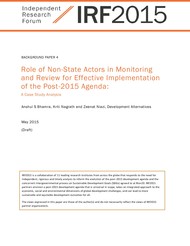 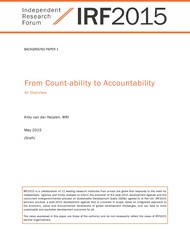 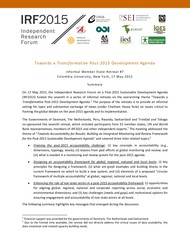 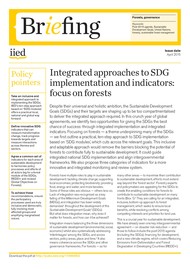 Integrated approaches to SDG implementation and indicators: focus on forests