A partnership formed in 2012, the Independent Research Forum (IRF) played an influential role as the Sustainable Development Goals evolved.

To view or download all of the IRF's briefings, discussion papers and reports, visit the IIED Publications Library.

The Sustainable Development Goals (SDGs) have been greeted as a game changer, not just by governments, but by business and civil society. But the development of this “transformative agenda” – seen as a response both to the 2008 financial crisis and the environmental and climate challenges – required not just an ambitious vision, but also a clear understanding of what sustainable development entailed.

The Independent Research Forum on a post-2015 sustainable development agenda (IRF) was established to inform that understanding. Drawing on the knowledge and experience of 10 research institutes and organisations working on sustainability across five continents, IRF sought to build support for a universal, integrated and transformative global development agenda which put sustainability and equity at its centre. In doing so, it not only influenced discussions at the UN level, but also informed actions at regional and national levels, opening doors and providing opportunities for collaboration. 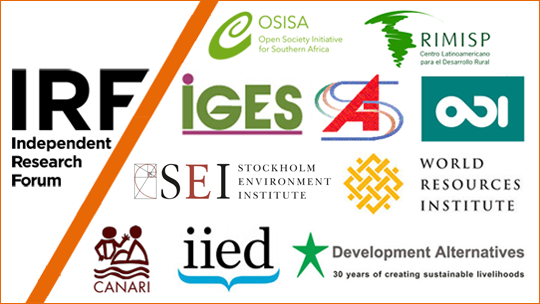 The idea for IRF emerged from discussions with UN officials at the Rio +20 summit, who were keen to engage sustainable development think tanks and research institutions in developing a new global agenda to replace the Millennium Development Goals. As the UN could not be expected to listen to all of the separate organisations, they would benefit tremendously from a consortium that would be a conduit and aggregator for the flow of diverse knowledge, perspectives and ideas.

Creating a space for discussion

IRF saw the Open Working Group (OWG), a group of interested UN Member States tasked with preparing a proposal on the SDGs for consideration by the General Assembly, as an opportunity to influence the process. Discussions between WRI and some of the lead OWG negotiators and UN officials resulted in the idea of a series of informal retreats for OWG members, facilitated by IRF. The initial four retreats were so successful that a second series was added in response to demand.

The retreats, running in conjunction with the OWG sessions, offered an open and non-confrontational space where member countries could discuss concerns quite openly. Another important factor was avoiding being prescriptive — IRF saw its role as helping to ‘unpack’ and frame complex issues and to provide options for discussion and debate. While the retreats were built to serve a specific need at a particular moment, they also demonstrated a way to fill a void in regional and international arenas where formal spaces for reporting and reviewing are the norm, but spaces for learning and informal exchange had been lacking.

The negotiators appreciated the format, and the open nature of the discussions, feeding back that they needed more meetings like these.

Overall, through the retreats IRF engaged with negotiators representing 51 countries. Crucially, the retreats gave those negotiators some understanding of the interdependence of the goals and the integral place of environmental sustainability across them, which ended up being well reflected in the way the SDGs were designed.

But it was perhaps the work that went into the retreats – and the way in which they drew together the global expertise, experience and perspectives of a diverse group of scientists, policy experts, thinkers and practitioners -- that helped give IRF a different dynamic. The team, comprising senior staff of IRF partner organisations, worked together, often in intense settings and with tight deadlines, drawing on and combining the learning from each partner in the design of the retreats and production of incisive and focused background material.

Each retreat was organised around a theme. The first three retreats were designed to encourage dialogue on key concepts, principles and approaches to an integrated, universal and transformative goal framework. A fourth retreat focused on finance for poverty eradication, with the subsequent three retreats focused on the challenges of implementation.

The process of preparing for the retreats was unique because three rare qualities came together: First, IRF convened highly skilled analysts from world class institutions who had at the same time highly diverse perspectives – both geographically and topically, into a common process. Second, the process was built on trust, respect and accountability – the diverse team members somehow managed to quickly develop a sense of community and purpose that allowed them to step away from their own interests.  Third, the process was highly adaptive to the needs and demands of policy makers. Each of the three qualities is very rare - and having them all in the same project is something of a once-in-a-lifetime experience.

The genuine camaraderie and mutual respect that quickly developed among the IRF partner representatives demonstrated the value of bringing together diverse competencies and perspectives to enrich a global process.  The partners learnt from and with each other.

The expertise accumulated in the process took IRF’s influence beyond the world of the UN negotiators, as partners were able to contribute to discussions and debates at national and regional levels, presenting at conferences, convening events and contributing to discussions with governments.

For regional partners, this international policy focus created new opportunities for engagement, focused on specific regional issues. For example, being part of IRF enabled Rimisp to engage with policy makers in Latin America on the challenges of implementing the new sustainable development agenda. For CANARI, being involved in IRF gave it a space to share a Caribbean small island developing state perspective while helping it to understand global perspectives and dynamics. Contact made with Caribbean negotiators in the Open Working Group led to CANARI being invited to support negotiators from the Caribbean Community (CARICOM).  This relationship continued beyond the SDGs process, and has opened a new avenue for bringing technical input and stakeholder perspectives to CARICOM negotiators.

Some partners, including the Open Society Initiative for Southern Africa (OSISA), worked with other IRF partners to take forward new areas of research and collaboration at the regional level. And in China, the CASS Research Centre for Sustainable Development (RCSD) was able to host a workshop for government officials in Beijing on “Perspectives and Implementation of 2030 Sustainable Development Agenda” ahead of the UN Summit to adopt the SDGs.

What became known as the 2030 Agenda was launched to the world at the UN General Assembly in 2015 – with 17 distinct but inter-connected Sustainable Development Goals. But IRF partners opted to continue their collaboration for a further three years, addressing questions around implementation – at a global, regional and national level.

In 2016, IRF joined the Government of Sweden to host a side event at the UN’s High Level Political Forum in New York, focusing on the key principle that no-one must be left behind. And last year, two further retreats were held in Liberia and Colombia, organised with the host governments, bringing together government officials and non-governmental organisational partners to discuss the challenges of making the 2030 Agenda vision a reality.

Individual partners have also continued related work, with for example IIED focusing on links with work on climate change, as well as evaluation, and SEI focusing on interlinkages between the different goals.

With the focus for implementation now firmly at the national level, the IRF partners feel it is time to shift our focus as well – but the ripples from our unique collaboration will continue to be felt in the work that we all do.

To view or download all of the IRF's briefings, discussion papers and reports, visit the IIED Publications Library.

Integrated approaches to SDG implementation and indicators: focus on forests