World Food Day: how do you keep co-operatives competitive?

The Food and Agriculture Organization's 2012 World Food Day on October 16 focuses on co-operatives. This time around co-operatives need to be what small-scale farmers actually want. Sometimes that means something quite informal.

‘Agricultural cooperatives – key to feeding the world’ ... chosen to highlight the role of cooperatives in improving food security and contributing to the eradication of hunger [PDF]

‘Co-operatives’ as THE answer…again?  I was surprised to see this World Food Day statement from the UN's Food and Agriculture Organisation (FAO). We all know of failed co-operatives, promoted by governments and the development sector since the 1960s, and ‘dropped’ in the 1980s with the new liberalisation policies. Most of these top-down creations didn’t survive without external support. They were often guided by political interests rather than by farmers’ concerns and needs.

But new grassroots co-operatives have been reborn from the ashes of failure — it’s not easy though, as I saw during three years working closely with the Junta Nacional del Café (JNC) in Peru. It took JNC a decade to compete in demanding markets while balancing needs of farmers, a social component, and management expertise. The JNC collapsed in the 1990s without state support, but now its 80 member cooperatives represent 50,000 small-scale coffee growers, and it is a top exporter in volumes and quality.

Some say co-operatives only work for export commodities that serve the waking North a cup of coffee, tea or chocolate. But in Venezuela the Central de Cooperativas de Servicios Sociales de Lara - CECOSESOLA  - is making co-operatives work for vegetable producers and domestic demand. It started in 1967 when people cooperated first to bury their dead in dignity. Later, it developed a scheme linking rural producers to urban food needs through weekly markets.

CECOSESOLA has kept its independence, putting members’ needs first. Before the Chavez presidency they were stigmatised as ‘communists’. Under Chavez they are seen as ‘capitalists’. Ideology may have a strong sway on whether cooperatives fail or succeed.

Evidence-based research since the 1990s has highlighted how different small-scale farmers need ‘differentiated polices’. Yet the past decade has mostly emphasised one approach: value chain interventions to ‘make markets work for the poor.’

But too often ‘inclusive business’ schemes based on formal value chains actually favour a narrow minority [pdf] of farmers  — perhaps 2–10% — who are more capitalised, educated, closer to urban areas and its infrastructure, and strongly oriented toward commercial agriculture.

A better question to explore is ‘How do the poor make markets work for themselves?’

Since 2009 IIED has been working with Hivos and a Global Learning Network that integrates farmers’ leaders, researchers, agrifood business entrepreneurs and development practitioners. Our collaborative Knowledge Programme, ‘Small Producer Agency in the Globalised Market’ looks at how small producers, as the economic ‘agents’, manage with globalisation and agrifood market restructuring. Small-scale farmers are economic actors, making choices and managing costs, profits and risks. They build on what they have as assets and capabilities, but also on their aspirations.

Co-operatives are having to compete. There are more buyers in the countryside looking to supply national and global demand. Roads are better and mobile phones are spreading. Youth has new aspirations and off-farm opportunities; so wages are pushed up and migration causes labour shortages. All these elements have profound implications for farmers' choices, and organisations’ competitiveness.

When prices are high, farmers sell to the highest bidder, not necessarily the cooperative. Low prices kill the farmers, but high prices can kill the organisation. ‘No one delivers the product simply for love of the cooperative’, says a La Florida representative. Formal organisations like co-operatives can have very high costs, and can face threats from government policies. Coffee co-operatives in Peru already paid 30% sales tax when the government tried to pass a new law taxing transactions between farmer and co-operative. That goes against the very principle of the co-operative model. The Junta Nacional del Café fought for months, finally getting this law withdrawn. You need strong organisations to shape the rules of the game!

Or maybe you don’t. Globalisation and modernisation are letting farmers innovate and find lighter and less expensive ways to organise and make markets work for them.

In Kasenda, in the west of Uganda, small-scale farmers have ‘institutionalised’ informal collective marketing arrangements to increase their profits. While matoke (cooking bananas—a staple food) ripen in the field, farmers, with their mobile phones, call relatives in Kampala and Fort Portal to check market prices. Trusted community informants circulate the information, and survey households’ expected harvest. Then they negotiate favourable large volumes and prices with buyers. The farmers bring their matoke to collection centres on designated days, where community representatives finalise negotiations and collect and distribute payments.

So, has the development community learnt lessons from failed top-down interventions? I welcome the FAO’s Food Day statement that ‘it is better to support existing cooperatives than to create new organisations that may lack grassroots commitment’. And to give them due credit, they do define ‘co-operatives’ very broadly: ‘any member-owned enterprise run on democratic principles…which can take other names and forms: producer organisations, self-help groups, unions and federations of producers…and [even] Chambers of agriculture’. …and ‘contract farming’?.

But anyway, understanding and improving the conditions under which small-scale farmers make markets work for themselves, whether in formal or informal organisations, is what lets them play their role as economic actors. It can ensure food security and provide a decent living from agriculture. It is time to understand where farmers really are rather than where we want them to be.

Our book ‘Small-scale farmers and the globalised market: Making choices in a changing world’, product of a large cooperation between IIED, Hivos and a global network, addresses many of these issues. It will be launched in the Netherlands on 29 November 2012 and posted soon on our website. We’ll keep you informed. 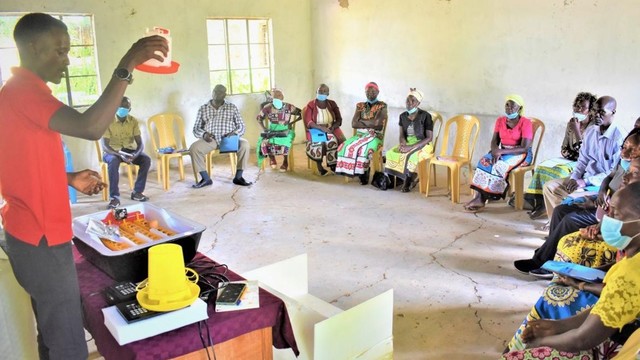