Land rights and investments: why business standards are not enough

Investments with large land footprints – from agribusiness plantations, extractives and infrastructure, all the way to manufacturing – can involve conflict over competing land claims and development visions. Top-down investment models are often to blame. But the law is also part of the problem.

In many national governance systems, features of the law facilitate dispossession – for example, they undermine certain rights to land and resources and do not create effective avenues for people to be heard. So, even when investments comply with legal requirements, they can trigger disputes, impair livelihoods and expose businesses to contestation.

Many companies apply international standards such as the International Finance Corporation’s Performance Standards on Environmental and Social Sustainability (IFC-PS) to fill gaps in national law.

Meanwhile, there is no comprehensive global treaty to regulate land governance, but soft-law instruments such as the Voluntary Guidelines on the Responsible Governance of Tenure (VGGT) promote reform through political consensus rather than binding norms.

Despite important areas of overlap, the IFC-PS and VGGT reflect fundamentally different responses to governance problems. Considering the VGGT can help businesses address blind spots in the IFC-PS (PDF). But effectively implementing the VGGT requires systemic action from local to global levels.

The IFC-PS help businesses manage the social and environmental impacts of their investments. The main actors are the business and its lenders; the main issue is aligning operating systems with globally recognised protocols. The VGGT, on the other hand, promote systemic governance reform to ensure respect for land and resource rights, and they clarify the roles and responsibilities of states, businesses and advocates.

With their focus on what businesses can do, the IFC-PS are easier for a firm to understand and implement. But they do not change the balance of enforceable rights and obligations between businesses, government and affected people. Discussing the place of such delocalised standards in global governance, some commentators have talked of ‘rules without rights’.

In contrast, the VGGT emphasise rights throughout – both the land and resource rights that are recognised by national law and other rights that people perceive to be socially legitimate. While not legally binding, the VGGT stress the close relationship between land and human rights, treating people as active rightsholders rather than passive beneficiaries of resettlement packages.

These different starting points affect the way specific issues are understood and addressed. For example, while the IFC-PS establish social and environmental safeguards, they do not question prevailing investment models. The VGGT, however, call for reconsidering the types of investment to pursue, favouring smallholder-sensitive approaches.

IFC-PS5 presupposes involuntary resettlement and seeks to restore affected livelihoods, whereas the VGGT promote consensual approaches based on partnership, not expropriation. More than the IFC-PS, the VGGT explicitly recognise power imbalances, social differentiation and the need for affected people to access legal and other support.

The VGGT also address issues that are not fully covered in the IFC-PS, such as historical land grievances and the cumulative impacts of investments, and they emphasise access to redress when harms occur.

From governance guidelines to business standards

Applying the IFC-PS has not shielded projects from land conflicts and public contestation. It may award affected people more generous compensation than required under national law and provide a hook for advocacy when things go wrong. But it does not address some of the more difficult land disputes, such as historical grievances, and it does not change the structural features of governance that facilitate controversial investments in the first place.

As the VGGT are not formulated in immediately operational terms, many have developed guides to help businesses implement them, filling gaps in approaches based on the IFC-PS. And indeed, there is much that companies can do differently – from identifying land rights issues in their due diligence exercises to listening to local actors through the investment cycle. A substantial body of guidance is available for operators, lenders, buyers and service suppliers.

In practice, the many uncoordinated guides and often their limited grounding in practical experience have made it more difficult for businesses to take up the guidance. Also, many firms do not prioritise land rights issues and will not be swayed by guidance simply being available.

There is a deeper-level challenge as well, in that the guides seek to translate holistic, rights-based guidance into the language of business operating systems. This creates inherent tensions, because the VGGT and their human rights framing require reconsidering not just applicable safeguards, but the balance of rights and obligations, voice in public decision making and the way investments are approved, contractualised and implemented.

From business standards to governance reform

Businesses that are committed to responsible conduct should upgrade and align their systems with the VGGT. But addressing issues at scale requires systemic governance reform. Depending on the context, this may involve restructuring control over natural resources, reconfiguring investment approval processes or entrenching responsible business conduct into any international trade and investment treaties.

Governance reform identifies governments as key agents of change. But governments are often part of the problem (PDF) and we cannot view the challenges in technocratic terms. Often, it is not technical ‘capacity’ that is missing. Rather, it is the political power to confront the vested interests behind governance systems that, in a sense, work well but for the wrong people.

In these cases, responses must navigate complex political economies affecting both national governance and the international arrangements that integrate low and middle-income countries into global commodity chains.

The challenges are steep. But unless we confront them, interventions will at best create islands of good practice that are difficult to sustain. Learning from success and failure can help us develop more effective approaches. It can also provide insights on whether the theory of change that underpins soft-law instruments such as the VGGT works in practice, and on how to translate international guidance into real change. 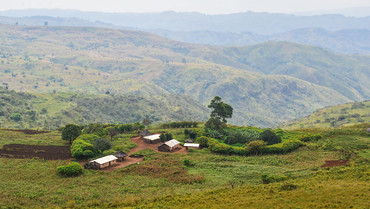 Land is life for billions of people, sustaining economic activities, social identity, ecological and cultural value. IIED works to secure local rights in the face of growing pressures on land