How Dhaka's urban poor are dealing with COVID-19

COVID-19 presents not only a health crisis, but a food crisis for Dhaka’s poorest. Guest blogger John Taylor describes how urban poor communities have risen to the challenge.

Blog by
John Taylor
John Taylor is chief technical adviser for FAO Bangladesh
01 July 2020
Collection
The transition to a predominantly urban world
A series of blogs and interviews exploring what social, political and environmental factors cause cities to thrive or decline
This series of blogs focusing on the transition to a predominantly urban world was planned before COVID-19. This pandemic brings such a devastating current and future health and economic impact that it demands our attention and commitment to work together to overcome it. This blog comes from John Taylor, an urban planner managing FAO's Dhaka Food System project in Bangladesh. During the lockdown John kept up to speed on how urban poor communities across Dhaka were coping with the impacts of the virus – on food prices and food security – through text messages from a close-knit network of around 150 community reporters.

The streets of Dhaka, usually bustling with life and congested with cars, have been remarkably quiet. On 26 March, the government imposed a lockdown to contain the spread of COVID-19. All shops and factories were closed, all forms of transportation restricted. Only essential services continued to operate.

These measures to slow the spread of the virus have dealt the heaviest of blows to the city's poor, who depend on jobs in the garment factories, the daily wage labour market, and the informal economy to survive. Without work, and with little cash in hand or savings, urban poor families in Dhaka have struggled – not only to keep themselves virus-free in crowded and badly-serviced settlements, but to get enough to eat.

In the city's crowded informal settlements, home to workers from all over the country, public services are not easily accessible. In these dense, makeshift settlements, maintaining social distancing is almost impossible.

Communal water sources for hand washing are scarce. So too are health centres for learning how to keep safe from the virus. On top of all this, for nearly three months they have had to feed their families and manage household expenses without jobs or income.

Dhaka's urban poor families have long been accustomed to adapting to temporary food and income shortages by eating less, but with significant consequences for health and nutrition, especially when eating less for a long time.

During the lockdown, poor families have reduced their diet to as little as one meal a day, and replaced more expensive, protein-rich foods like chicken, fish, and beef with cheaper staples such as lentils, potatoes and rice. To buy food, they have had to borrow, sell their belongings or draw from what savings they might have.

Other survival strategies have included changing jobs to be mobile food vendors (permitted because they are considered essential services) or breaking lockdown rules, going out as rogue rickshaw drivers. 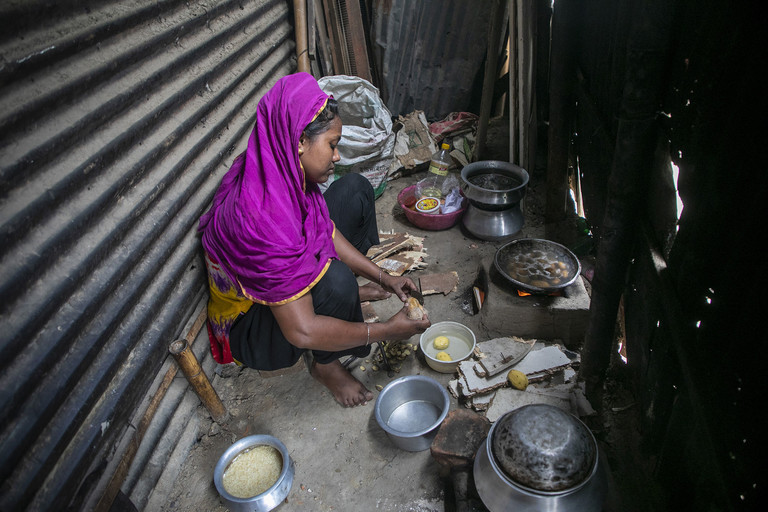 The mother of two children in the Agargaon slum cooks potatoes, lentils, and rice for six family members. She lost her domestic helper job and has been using her savings to feed her family. (Photo: copyright Saikat Mojumder)

The urban poor have displayed great kindness and support to their neighbours, friends and family during lockdown: sharing food, distributing food assistance packages, and lending money. With no real social safety net and an inadequate government response, these spontaneous and organised acts of mutual aid have been a lifeline for those hit hardest.

Organised community-level responses to the crisis have helped ensure the health and safety of the most vulnerable. Through their leadership and initiative, community-based organisations of informal settlement dwellers have served as mediators, helping to evenly distribute aid and food assistance, organise virus-prevention activities and provide basic hygiene and safety services.

One such organisation is the Urban Poor Federation of Dhaka North City, linking 350 Community Development Committees (CDCs). The federation is organised around community savings groups and provides accessible finance to urban poor groups.

Detailed information about urban poor households most in need is not readily available.

When the government signalled they would distribute food to the poor, community leaders from CDCs created lists of the most vulnerable residents: widows, pregnant or lactating mothers, disabled people, or those who couldn't afford food. These lists helped ensure food assistance and donations went to those in desperate need and not the better off.

As Sumi, a community leader from Narayanganj City, put it: “We work at the grassroots level so it is easier for us to identify the people who are in real need”.

On 16 April, the Prime Minister launched an initiative to register five million poor households across the country, who would be eligible to buy heavily subsidised food staples. Community leaders worked with the city government to formulate the lists.

Every day in the informal settlements they collect household waste, clean trash from the roadsides and scrub pavements with bleach provided by the city government. The federation is constantly running campaigns with residents about the importance of keeping themselves and their localities clean. 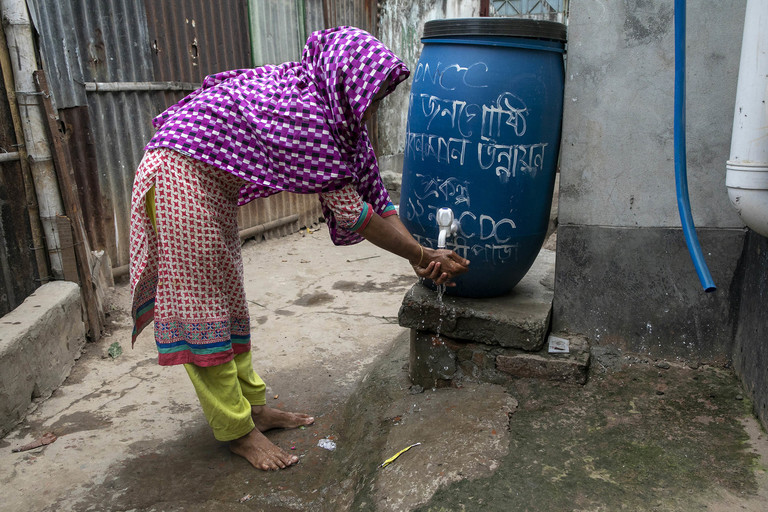 Hand washing stations have been set up in centrally located areas within slums to prevent spread of the virus (Photo: copyright Saikat Mojumder)

The lockdown has brought a surge in urban agriculture – both in practice and in recognising its value as a reliable and sustainable source of nutritious food during hard times.

Over the past few months, hundreds of small household and community fruit and vegetable gardens have sprung up on little pieces of land and vacant lots. They have become a lifeline, providing families with nutritious food they can't afford to buy in the market. Urban agriculture can also create an alternative income source. 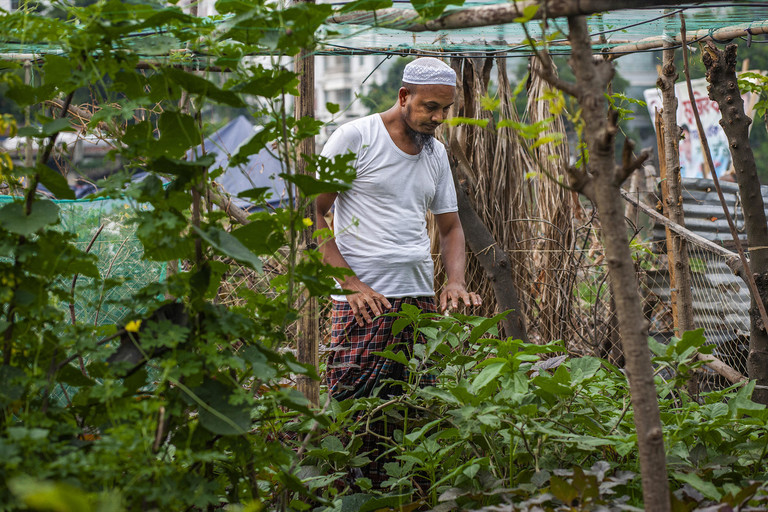 Mohammad Nurunnabi (39) grows vegetables for his family in his homestead garden Banani TNT Colony. He is on leave from his garment factory job due to the lockdown (Photo: copyright Fahad Abdullah Kaiser)

In the Korail Bosti, an informal settlement of over 100,000 residents in the city centre, 20 enterprising residents have cultivated small vegetable gardens on the banks of the surrounding lake. With jobs scarce, they have relied on their crops for subsistence, and begun to sell produce to neighbours at prices well below market rate.

Community-based agriculture calls for management of abandoned or unused land, irrigation pumps and gardening tools – but the efforts pay off, enabling communities to cultivate urgently-needed food, thereby building their resilience and group power. 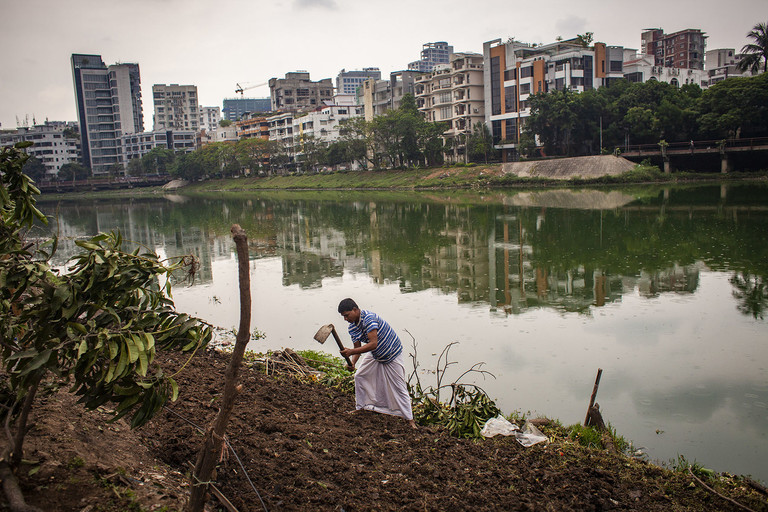 Mohammad Badol (38) is a resident of the Korail Bosti informal settlement. He prepares the ground on his lot on the bank of Banani Lake to grow vegetables. Having lost his garment factory job, he sells vegetables to other residents as well as helping to feed his family (Photo: copyright Fahad Abdullah Kaiser)

Instead of withdrawing in fear of being infected, the urban poor community groups in Dhaka have shown bravery and commitment as promoters of true community development. Selina Begum, president of the Dhaka North Federation puts it like this: “We did not step back. We have continued our social services amid this COVID-19 emergency by protecting ourselves and working hard. We’ll be stronger now in the face of a health emergency.”

Drawing on their local knowledge, they have led efforts to organise communities to protect themselves and to ensure that assistance goes to those who need it most; they have turned the challenge of the virus on its head, using it as an opportunity to build their capacity and find new ways of looking after the city's most vulnerable citizens.

The next blog in this series will examine the global geography of 'world' cities. 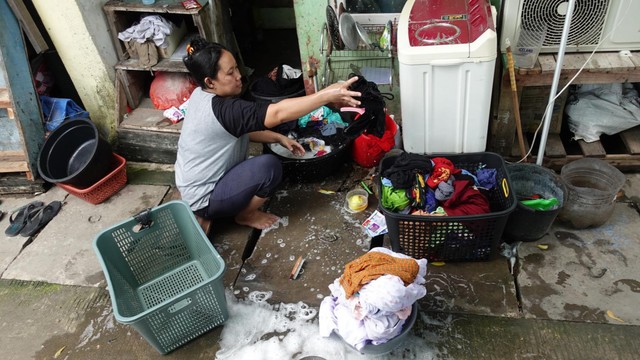