Tipping the Balance: Policies to shape agricultural investments and markets in favour of small-scale farmers 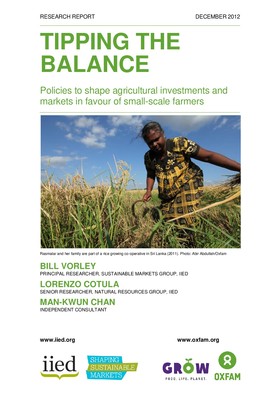 A recent wave of large-scale land acquisitions and other commercial investment in agriculture has raised concerns that small-scale producers are being marginalized. Worldwide, around 500 million small farms support almost two billion people – nearly one-third of the global population. What role can public policy play in ensuring that commercial investment and agricultural markets benefit smallholder producers, both women and men, while respecting the environment?

Oxfam and IIED collaborated on research to take a new look at the role of public policy and market governance at a national level in supporting inclusive sustainable development. This report identifies key policy levers that can tip commercial investments in favour of either small- or large-scale farming. And it shows how policy levers influence market governance to constrain or to support the fair sharing of risk and reward between small-scale producers and the rest of the market. A key element of the report is the examination of policy elements that can specifically contribute to gender-equitable results. Four country case studies, conducted in Guatemala, Nigeria, Tanzania and the Philippines, supported the research.