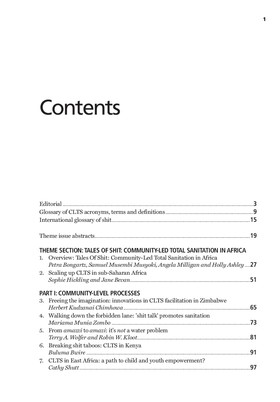 Where do you shit? In developing countries, the answer may determine whether you live or die. Around 2.6 billion people defecate in the open. The consequences are dire: shit carries disease and is a major killer. Recently, a radical new participatory approach called Community-Led Total Sanitation (CLTS) has encouraged millions of people to look at, talk about and tackle the problems caused by open defecation. Communities analyse their hygiene habits and practices and mobilise to take collective action to totally sanitise their environments. Following its development and spread in Asia, CLTS is now being piloted in Africa.

Participatory Learning and Action (PLA, formerly PLA Notes) is the world's leading series on participatory learning and action approaches and methods. PLA publishes articles on participation aimed at practitioners, researchers, academics and activists. All articles are peer-reviewed by an international editorial board.