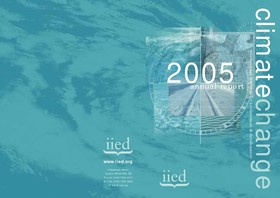 The year 2005 has seen both a dramatic rise in evidence of global warming and a number of key political milestones. But efforts to reduce greenhouse gas emissions to date have been far less than is needed to prevent dangerous climate change for most people and ecosystems on the planet. In the next decade or two, the adverse impacts of climate change are already "locked in" because of delays in the global climate system responding to greenhouse gases already emitted.

This 2005 Annual Report focuses on climate change and how each of the IIED Groups will integrate a climate change focus in their work. Such a shift in emphasis enables us to build on existing strengths while looking forward to ensure we are ready for new priorities over the next decade. Each of IIED’s Groups has major contributions to make in understanding impacts of climate change on resources, welfare and livelihoods, as well as showing how carbon emissions can best be reduced.