Critical list: the 100 nations most vulnerable to climate change 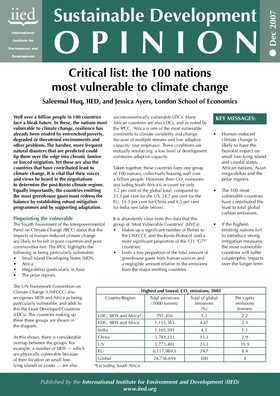 Well over a billion people in 100 countries face a bleak future. In these, the nations most vulnerable to climate change, resilience has already been eroded by entrenched poverty, degraded or threatened environments and other problems. The harsher, more frequent natural disasters that are predicted could tip them over the edge into chronic famine or forced migration. Yet these are also the countries that have contributed least to climate change. It is vital that their voices and views be heard in the negotiations to determine the post-Kyoto climate regime. Equally importantly, the countries emitting the most greenhouse gases must redress the balance by establishing robust mitigation programmes.