Beyond Rio+20: Governance for a green economy 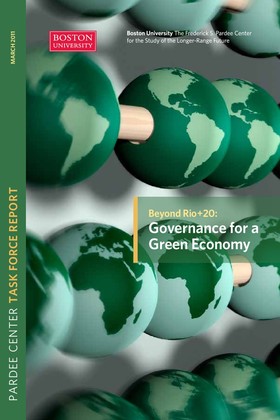 Beyond Rio+20: Governance for a Green Economy is the second in The Pardee Center Task Force Reports series, and, as it happens, the timing for this report could not have been better. Recent and upcoming international meetings convened by the United Nations are focused on the challenges of actualizing the promise of sustainable development, of recreating a world economy that is~“greener” and more sustainable, and identifying institutional frameworks that could help achieve this vision. Marking the 20th anniversary of the historic Rio Earth Summit of 1992, the 2012 UN Conference on Sustainable Development(UNCSD)—popularly called Rio+20—has set for itself the goal of deliberating upon and designing such an architecture. This Pardee Center Task Force Reportis a contribution to these deliberations.