A paper in the latest issue of the journal Environment & Urbanization highlights how urban plans for adapting to climate change often leave out migrant populations living in informal settlements. Guest bloggers Eric Chu and Kavya Michael call for a rethink.

Blog by
Eric Chu
and
Kavya Michael
Eric Chu is a lecturer in planning and human geography at the University of Birmingham; Kavya Michael is an associate fellow at The Energy and Resources Institute, New Delhi
09 May 2019

As cities across the global South grapple with climate change, many are designing plans to deal with escalating climate impacts including erratic precipitation and unpredictable shifts in temperature. And in response to global agendas such as the Sustainable Development Goals and the Paris Agreement, these plans seek to integrate basic development priorities while improving access to basic services including water, sanitation and health.

Many approaches encourage decision-makers, scientists, and NGOs to participate in the planning process. However, ‘participatory’ processes often leave marginalised groups out of the picture.

This is particularly true in the global South where high levels of economic inequality, absence of effective leadership, and prevalent political corruption hinders socially accountable and sustainable processes to manage the impacts of climate change. 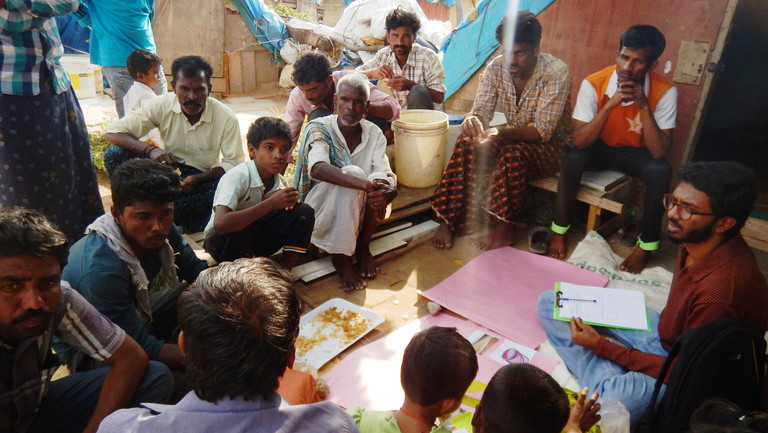 Our recent study of migrants in the Indian cities of Bengaluru and Surat (open access) highlights the challenges of promoting climate adaptation in places with long histories of social, economic and cultural diversity.

Why are supposedly participatory adaptation plans exclusionary or inequitable? How do we make sense of this contradiction?

In the southern city of Bengaluru, studied under the Adaptation at Scale in Semi-Arid Regions (ASSAR) project, we explored how migrants living in flood- and diseases prone informal settlements are coping with exposure to climate change. Precarious living circumstances are compounded by exposure to heat stress often experienced during manual labour such as waste-picking.

Added to these climate vulnerabilities, long standing social constructs deepen migrants’ challenges. Given their status as unskilled, landless labourers, migrants are regarded as ‘out-of-state’ citizens. This includes members of the Other Backward Classes (OBC) – a term used by the Indian government that encompasses educationally, economically and socially disadvantaged groups.

These groups do not have access to formal public services such as state-based health schemes and subsidised rations of water, foodstuffs and basic supplies. In the event of a disaster, migrants are the most prone to illness and death.

Surat was one of the first members of the Asian Cities Climate Change Resilience Network (ACCCRN) and the 100 Resilient Cities programmes. Strong political leadership on climate action translated into keen interest from multilateral donors. Local industrialists and business leaders also rapidly learned about the perils of climate change.

However, subsequent plans to implement adaptation programmes focused on the needs of local business, leaving out the city’s migrant population.

Eventually, plans began to target flood protection for businesses and insulation for formal housing. In the name of ‘urban development’ or ‘climate resilience’, many informal settlements were razed to make way for building flood protection measures and to reinforce embankments.

Having been left out of the plans, migrant communities were forced to relocate. Their increasing exposure to climate risks and lack of political representation led to their displacement, breaking the valuable social and economic networks they need to survive.

Our study shows that city planners persistently fail to recognise migrants in urban adaptation plans and policies. In Bengaluru and Surat, political ideologies, social values, and access to economic opportunities combined work against marginalised groups, excluding them from these plans and processes.

We need a new vocabulary around social justice that recognises the interests, needs and voices of historically marginalised groups.

Adaptation plans must intentionally allow spaces for recognising class, caste, gender and age-related implications of proposed actions. Planning processes must take the inclusion of all urban residents seriously – not only those who are privileged, knowledgeable or powerful. This will help to promote plans that bridge the vast inequalities in economic and political power across the global South.