Voices and Flavours from the Earth: Visualising Food Sovereignty in the Andes, Chapter 4 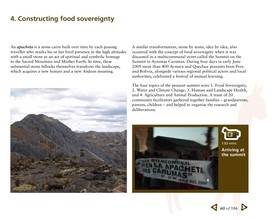 An apacheta is a stone cairn built over time by each passing traveller who marks his or her brief presence in the high altitudes with a small stone as an act of spiritual and symbolic homage to the Sacred Mountain and Mother Earth. In time, these substantial stone hillocks themselves transform the landscape, which acquires a new feature and a new Andean meaning.

A similar transformation, stone by stone, idea by idea, also occurred with the concept of food sovereignty when it was discussed in a multicommunal event called the Summit on the Summit in Ayrumas Carumas. During four days in early June 2009 more than 400 Aymara and Quechua peasants from Peru and Bolivia, alongside various regional political actors and local authorities, celebrated a festival of mutual learning.

The four topics of the peasant summit were 1. Food Sovereignty, 2. Water and Climate Change, 3. Human and Landscape Health, and 4. Agriculture and Animal Production. A team of 20 community facilitators gathered together families – grandparents, parents, children – and helped to organise the research and deliberations.

To download the full publication or other individual chapters, please follow the ‘More information on IIED site’ link below