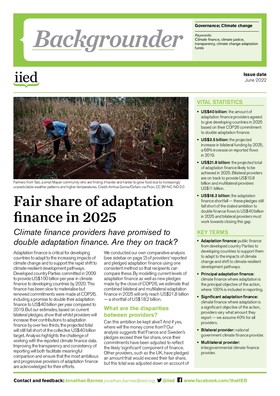 Adaptation finance is critical to developing countries for adapting to the increasing impacts of climate change and to support the rapid shift to climate-resilient development pathways. At COP26 in November 2021, developed country Parties promised to double their adaptation finance to US$40 billion. But our estimates, based on current bilateral pledges, show the projected figure will actually fall short.

We conducted our own comparative analysis of providers’ reported and pledged adaptation finance using one consistent method so that recipients can compare these. By modelling current levels of adaptation finance as well as new pledges made by the close of COP26, we estimate that combined bilateral and multilateral adaptation finance in 2025 will only reach $22.8 billion — a shortfall of $17.2 billion.

Our fair share analysis suggests that providers could achieve an extra $14.3 billion by 2025 if each country pays its ‘fair share’ or if pledges are doubled year on year for those countries most off track – money which could go a long way to bridging the gap.