Sanitation and drainage in cities II 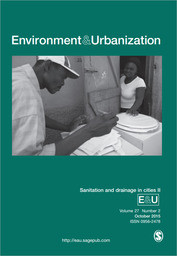 In light of the failure to reach the sanitation target of the Millennium Development Goals (MDGs), this issue of Environment and Urbanization explores methodological, political, financial and other challenges to measuring and improving sanitation in urban areas.

Only one of the countries covered in these two issues met its MDG target. Some even saw their urban populations’ access to improved sanitation decline from the start of the reporting period in 1990. These papers are therefore very timely given the global discussion around how to ensure the stronger performance of the Sustainable Development Goals (SDGs). However, as the editorial points out, it will be essential to establish a robust monitoring system to actually implement the SDGs.

The themed papers in this issue cover Maputo (Mozambique), Johannesburg (South Africa), Mumbai and Chandigarh (India), Ulaanbaatar (Mongolia), Dar es Salaam (Tanzania), Lusaka (Zambia), Cap Haitien (Haiti), Shanghai (China) and Accra (Ghana). Topics covered include the realities and limitations of market-driven sanitation services; the interplay of politics and history in determining the context of urban sanitation; the role of tenure in sanitation decisions; and innovations in the management of waste. Several papers address the prevalence of communal sanitation in poor urban environments, despite shared sanitation not falling under the definition of “improved” sanitation. The papers also highlight that progress in extending sanitation access has been highly uneven.

The papers on climate change provide examples of positive steps toward resilience. These cover Uganda (where residents of informal settlements are engaging in participatory resilience building) and Indonesia (where two cases of adaptation in riverbank settlements are compared).