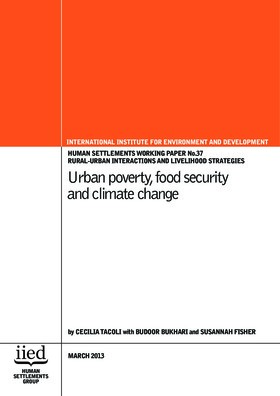 The high and volatile food prices that triggered a renewed interest in food security since the 2008–09 crisis are expected to continue because of factors that include the impacts of climate change. Current policy prescriptions focus on food production; however, a broader approach based on food systems is more appropriate as it encompasses all aspects of food production, storage, distribution and consumption, all of which will be affected by climate change and especially by the growing frequency and severity of extreme weather events. As most low-income groups in both rural and urban areas are net buyers of food, access and affordability are central concerns. There is also a need for more attention to urban food security. While more than half of the world’s population now live in urban centres and on average benefit from higher incomes and better living conditions than rural residents, there is also considerable inequality between wealthier groups and the residents of low-income and informal settlements. Low and irregular incomes are the root cause of urban food insecurity, but inadequate housing and basic infrastructure and limited access to services contribute to levels of malnutrition and food insecurity that are often as high if not higher than in rural areas. They also increase exposure and sensitivity to the impacts of climate change and affect the ability to build resilience. Effective policies need to address urban food insecurity in both its income and non-income dimensions, and their impact on gendered disadvantage.