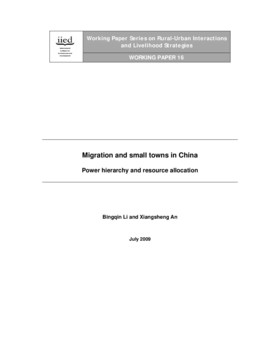 Small towns play a significant role in the economic growth and urbanization of China, attracting migrants from rural areas and other urban centres. Between 1978 and 2007, small town residents as a proportion of the urban population increased from 20 percent to 45 percent. While migrants contribute to the local economy, they also bring new challenges. With a focus on the role of local government, this paper examines how small towns in China cope with migration flows using a power hierarchy-resource allocation framework. The key argument is that how well small town authorities deal with migration is a combined result of the power they may enjoy in the government hierarchy and the resources they are able to acquire to promote local economic development and provide public services. Drawing on four case studies of small towns in Shanxi Province, the authors examine how power hierarchy and access to resources can constrain the ability of small towns to turn migration into a force for development and how these small towns have coped.