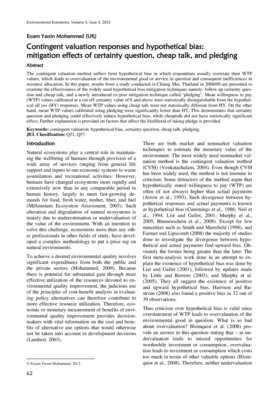 The contingent valuation method suffers from hypothetical bias in which respondents usually overstate their WTP values, which leads to overvaluation of the environmental good or service in question and consequent inefficiencies in resource allocation. In this paper, results from a study conducted in Chiang Mai, Thailand in 2008/09 are presented to examine the effectiveness of the widely used hypothetical bias mitigation techniques namely: follow up certainty question and cheap talk, and a newly introduced ex-post mitigation technique called ‘pledging’. Mean willingness to pay (WTP) values calibrated at a cut off certainty value of 8 and above were statistically distinguishable from the hypothetical all yes (HY) responses. Mean WTP values using cheap talk were not statistically different from HY. On the other hand, mean WTP values calibrated using pledging were significantly lower than HY. This demonstrates that certainty question and pledging could effectively reduce hypothetical bias, while cheaptalk did not have statistically significant effect. Further explanation is provided on factors that affect the likelihood of taking pledge is provided.