Three things I learnt from a small-scale fisherman in Albania

During a recent visit to the Albanian coastal town of Shëngjin, Essam Yassin Mohammed heard about the obstacles facing the small-scale fishing community, and was struck by recurring challenges facing artisanal fishers in different parts of the global South.

Let me start with a confession. I have not previously had any intellectual curiosity in the Mediterranean region. Perhaps my only connection with the area is that I was born in Tripoli, Libya.

But last month, IIED's ongoing work to champion schemes that compensate small-scale fishers for lost revenue during fishing restrictions took me to Albania.

I was visiting the country for the first time without much knowledge of government institutions, local power structures, cultural norms or any clear idea of what fishing villages in the country looked like.

The purpose of the visit was to find out the extent to which small-scale fishers have access to social protection schemes. I visited a small fishing town called Shëngjin around 62km north of the capital, Tirana.

We drove to a deserted harbour and started looking for fishers who were willing to talk to us. We approached one man and asked if he would be prepared to answer our questions. Evidently drained from long hours of fishing, he politely declined but kindly offered us some juvenile flatfish from his bucket. If there is something universal I've noticed about fishers, it's their generosity.

Later, we met a fisherman called Selvator Toma and his son Xhulio, who were acquaintances of our interpreter and guide. They greeted us with beaming smiles.

Using my rusty Italian, I began by asking about the key challenges he and his father face as fishermen. His smile suddenly dropped and he became notably agitated; I could tell he was about to offload frustrations.

He proudly showed me some pictures on his smartphone, including an impressive shot of him holding seven large seabass. "I know how to catch good fish and never target small fish. And I know how much my catch is worth in the market. But the middleman controls wholesale prices, driving down the cost of our fish – and there is no room for negotiation. I am sure my fish fetch up to three times more when sold to restaurants and hotels."

Xhulio angrily explained how he is forced to catch more fish to make ends meet. He gestured towards our guide who, until recently, had worked in the government's Directorate of Fisheries: "The government should help us develop a local market where we can sell our catch in an auction," he said. Xhulio believes a conventional market where fish is sold to the best bidder would be fair and eliminate problems associated with monopoly. 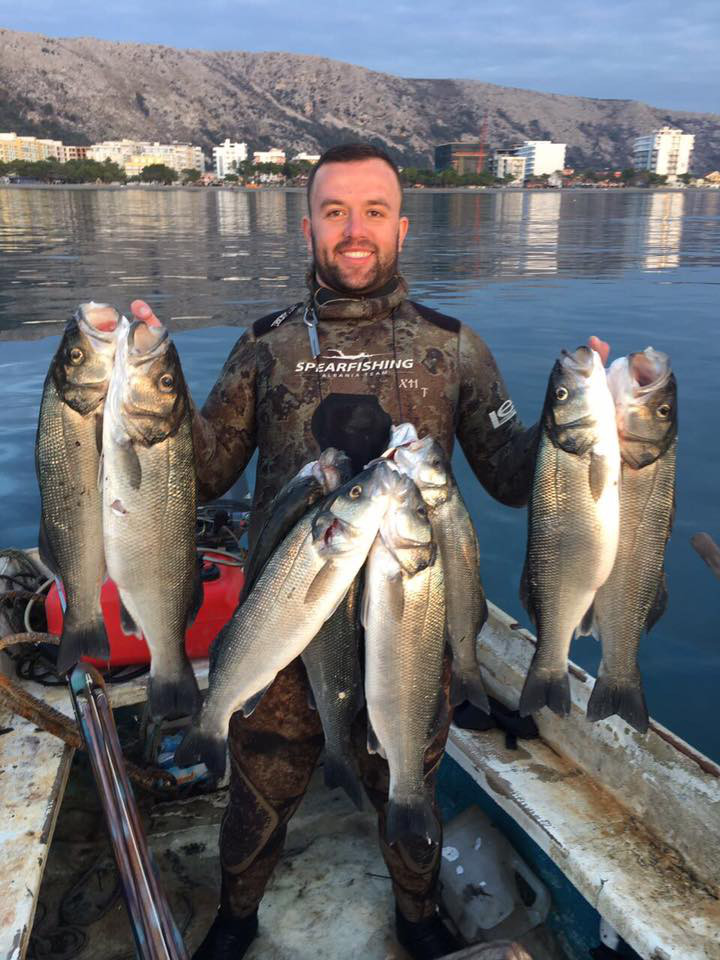 Xhulio explained that the coastal waters up to three miles from shore are reserved for small-scale fishing and large-scale fleets are not legally allowed to fish in this area. However, according to Xhulio, many large-scale fishing fleets, mainly trawlers, come as close as 500 meters from the coast. The competition is clearly a threat, but Xhulio is also concerned about how these fleets can damage the marine environment.

The trawlers dredge the seabed, destroying the habitat. As a spear fisher, Xhulio sees how the habitats of fish including his favourite – the seabass – is being destroyed, forcing them to move to other environments. The depleting numbers also show that seabass is being overfished.

Furthermore, as these large fleets grind their way along the seabed, they often destroy the fishing nets of small-scale fishers. This is devastating for these poorer fisherfolk for whom fishing gear is a significant expense, and critical in supporting their livelihoods.

"Doesn't the government penalise those who are breaking the law?" I asked, quite naively. With a bitter smile, Xhulio told me how the owners of these fleets are good friends of the 'big guys' – indicating that regulations are not properly enforced. Even if enforced, penalties are as little as 300 euros, which big fishing fleets can easily earn in an hour – making these fines ineffective as deterrents.

While we were chatting, Xhulio pointed to a trawler less than a mile from the coast. "Ora mi credi?" he said as his eyes lit up – 'do you believe me now?'. I was staggered to see such an enormous vessel so close to the shoreline and nodded my head in agreement.

Xhulio's voice grew louder and angrier as he became more passionate and frustrated. "Bigger fish are overfished by the trawlers, forcing us to target juvenile fish using smaller mesh sizes – which is illegal. And the government are quick to point the finger at us," he said, motioning again at our guide. This reminded me of the first fisherman we met, carrying a bucket filled with very small juvenile flatfish.

Some fishermen are giving up on marine fisheries and going upstream to target riverine fish. But Xhulio explained how this brings with it another bad practice where fishers use dynamite to catch fish. This illegal practice uses explosives to stun fish and often destroys the underlying habitat, such as coral reefs.

I was keen to hear how Xhulio would tackle these challenges and asked – if he had the power – what changes would he make to benefit small-scale fishers? He offered three concrete measures:

From Mozambique to Myanmar, Bangladesh and now Albania, IIED is examining the challenges facing small-scale fishers across the global South – and it's striking how this diverse international community is bound by common local struggles.

IIED's ongoing body of work is built around getting attention for these issues in the right policy spaces, while championing the significant social and economic contribution of small-scale fishers. Learning more about the day-to-day threats facing fishers like Xhulio strengthens our resolve to forge platforms for getting these voices heard.

Bangladesh: protecting the Hilsa from overfishing