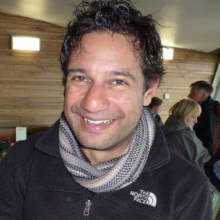 David has a background in anthropology with a research focus on pastoralism and the drylands (East Africa), water governance, the impacts of large scale development projects (dams), and indigenous conceptions of prosperity and poverty.

David previously worked as a research associate in the Department of Anthropology at University College London on an ESCR-DFID funded project called SIDERA – ‘Shifting (In)equality Dynamics from Research to Application’ (2018-2019). He explored recent social and environmental change in a remote part of southwest Ethiopia – the lower Omo valley – with a particular focus on the downstream impact of a mega-dam (the Gibe III) on vulnerable and marginalised agro-pastoralist communities living along the river Omo.

He has spent considerable time living and working among the pastoralist Nyangatom people on the border between South Sudan and Ethiopia.

He holds a Masters in Anthropology, Development and the Environment from University College London (2016)