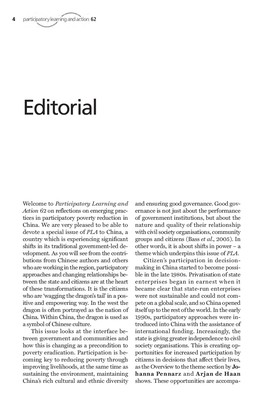 This issue of Participatory Learning and Action (PLA62) reflects on participatory processes that are transforming the interface between the government and communities in China. These processes are key to reducing poverty, at the same time as sustaining the environment, maintaining China’s rich cultural and ethnic diversity and ensuring good governance.

Increasingly in China, the state is giving greater independence to civil society organisations. This is creating opportunities for increased participation by citizens in decisions that affect their lives. These changes are being accompanied by changes in the political decision making processes at the local level, largely due to the election of village committees, greater service orientation and increasing attention to consultative processes by government departments.

This Opening Editorial sets the scene for the rich array of articles in the issue, many written by government officials and community members from villages in rural China involved in poverty reduction initiatives.