Climate change and health in Zambia 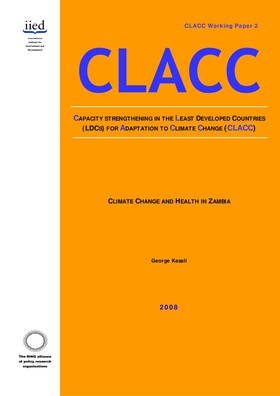 This study addresses issues concerned with the vulnerability and adaptation of the healthsector in Zambia to the impacts of climate variability and change. It constitutes the first step, which is to conduct a baseline analysis of the actual and potential adverse impacts on human health of climate variability/change and the coping strategies currently in place~to respond to these impacts.~Zambia, with a population of about 11 million, is currently saddled with a large burden of disease. This burden is incessantly robbing the country of millions of productive hours, with over 8 million clinical cases per annum of malaria, diarrhoea, respiratory infections and other communicable but avoidable illnesses. The situation is further worsened by the increased frequency and magnitude of climate variability in recent years. The southern, eastern, and western parts of Zambia have had to endure three droughts, three floods and only one normal rainy season (2003/04) in the seven years since 2000. Of most concern, these climate anomalies are able to stifle or even reverse improvements in health by increasing illnesses and deaths in the affected populations. This study has found that floods and/or droughts can increase levels of diseases in some affected localities by as much as 50% or even 400%. ~The high vulnerability of the health sector in Zambia to the adverse impacts of climate variability/change is rooted in the widespread prevalence and proliferation of health risk factors within the population. These factors include inadequate health care facilities and personnel, extensive poverty, poor water supply and sanitation, and poor nutrition coupled with food insecurity.