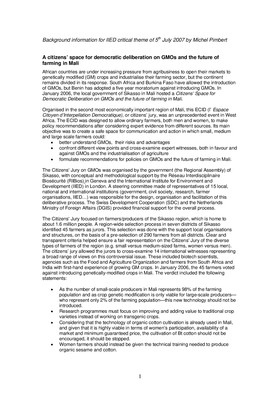 African countries are under increasing pressure from agribusiness to open their markets to genetically modified (GM) crops and industrialise their farming sector, but the continent remains divided in its response. South Africa and Burkina Faso have allowed the introduction of GMOs, but Benin has adopted a five year moratorium against introducing GMOs. In January 2006, the local government of Sikasso in Mali hosted a Citizens’ Space for Democratic Deliberation on GMOs and the future of farming in Mali.