Dilys Roe explains why development organisations can no longer remain absent from debates on how to tackle dangerous declines in biodiversity.

2020 marks the United Nations' 75th anniversary. It will also be a crunch year for international environment and development diplomacy.

The 2030 international development agenda – anchored around the UN Sustainable Development Goals (SDGs) – will reach its mid-point and progress against the goals will be assessed; the UN Framework Convention on Climate Change (UNFCCC) will assess whether the commitments for 2020 laid out in the Paris Agreement have been met; the UN will pursue a new treaty to regulate the high seas, and parties to the UN Convention on Biological Diversity (CDB) will agree a new 10-year framework to tackle the alarming rate of biodiversity loss.

Both environment and development communities were active in shaping the SDGs and the Paris Agreement. But to date, the same engagement has not been seen in negotiations to manage the world’s biodiversity.

The CBD launched its consultation on the post-2020 international biodiversity framework – the ‘new deal for nature’ – in late 2018. Of over 90 responses to the first call for inputs on the shape and content of the new framework, the vast majority were from conservation agencies. A handful of rights-focused organisations contributed; development organisations were absent completely.

But isn't biodiversity about elephants and lions? Where’s the fit with development?

So why have development organisations not engaged in biodiversity diplomacy in the way they have with climate change?

Part of the problem is that the links between biodiversity are complex, and often hard to communicate. It is easy for development organisations to assume biodiversity is tangential to their work – or even works against it.

For example, some assume biodiversity means iconic species of wildlife which, while nice to have, appear largely irrelevant to mainstream poverty alleviation and development efforts. And we’ve all heard stories of conservation efforts to save some species of wildlife bringing about significant costs to poor people and even appearing to undermine development.

But biodiversity isn’t just about charismatic creatures – it is about all of life. And it’s about variety: from genes to micro-organisms to top predators and even whole ecosystems. We depend on biodiversity for everything from clean air and fresh water to medicines (modern and traditional) and secure food supplies in the face of a changing climate.

Yet human activities are destroying biodiversity at least 1,000 times faster than the ‘background’ rates at which biodiversity loss – a natural phenomenon – occurs.

Lost ecosystem services can increase gender-specific labour burdens (for example where women walk further for fuel or clean water). Biodiversity loss can also make private sector investments more risky since many business models rely on access to natural ecosystems and areas of high biodiversity. And being associated with adverse impacts on biodiversity can be a reputational risk to businesses and affect their social license to operate.

As for climate change, biodiversity loss can hamper efforts to adapt to the impacts, exacerbate natural disasters, and reduce carbon storage.

Furthermore, biodiversity loss is hitting the poorest people first and hardest. Biodiversity underpins environmental goods and services that poor communities can ill-afford to ‘buy in’ – such as flood protection, drought resilient crops, and wild-caught protein.

Our issue paper and briefing provide an overview of the evidence that biodiversity loss is not just an environmental issue, but an impending development crisis.

The structure and content of the post-2020 international framework for biodiversity management is being discussed now. Prominent suggestions for the framework’s key elements are area-based conservation targets including, among other things, the “Nature Needs Half” or “Half Earth” campaigns that call for 50% of the worlds and sea to be protected before 2030 and 2050 respectively; and the Wyss Campaign or UK government calls to conserve 30% by 2030.

While these campaigns seem well intended, one potential problem is that the priority of securing “area” for biodiversity will completely outweigh any consideration of the social impacts it may cause.

Development and rights-based organisations need to get on board, and fast. It is crucial they engage in discussions to ensure the post-2020 strategy and targets reflect issues of social justice, human rights, good governance and poverty alleviation. What we need in 2020 is not a new deal for nature, but a new deal for nature and people. 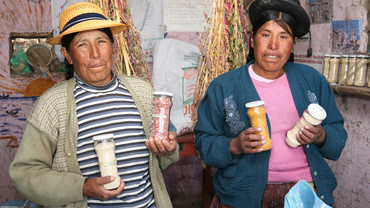 Nature 4 Development: improving evidence and dialogue on biodiversity and development

IIED and partners are assessing the evidence that investing in nature delivers development outcomes for poor people, and enhancing dialogue between conservation and development communities