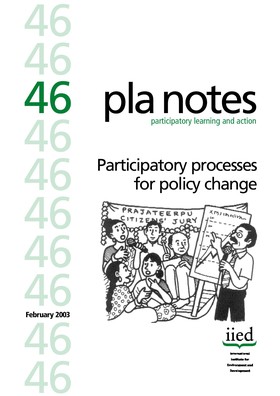 This issue has a special theme section on Participatory processes for policy change. It reports in depth on the debate that followed the publication of a report into a citizen's jury experiment in Andhar Pradesh in southern India. This programme of juries focused on farming and food policy, with the aim of identifying areas that were of importance to marginalised groups. To do this, members of the jury were hand picked, rather than selected randomly.

The debate that followed was heated, with many people involved in participatory work around the world becoming involved. To manage this debate, an e-forum was established, with people encouraged to contribute their views. This edition is a direct result, with articles from the original workshop facilitators and report editors, academics, researchers, UK Government officials; and the people who established the e-forum.

Also included in this issue are more general articles, including:

An article describing how PLA techniques were used with drug users in northern Myanmar.

A paper looking at the use of participatory techniques to assess the behaviour and sexual health of adolescents in Nigeria.

An article about participatory approaches to the assessment of built heritage, based on an example from New Zealand.

An article on diagnosing priorities for rural women's welfare through participatory approaches in the Punjab, Pakistan.

An article about participatory 3-D models as a tool for natural resource management planning in Vietnam.