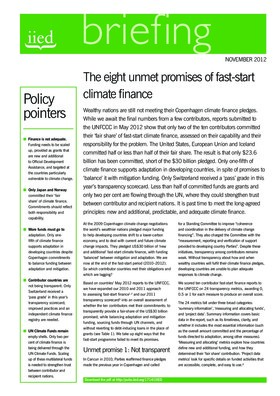 Wealthy nations are still not meeting their Copenhagen climate finance pledges. While we await the final numbers from a few contributors, reports submitted to the UNFCCC in May 2012 show that only two of the ten contributors committed their ‘fair share’ of fast-start climate finance, assessed on their capability and their responsibility for the problem. The United States, European Union and Iceland committed half or less than half of their fair share. The result is that only $23.6 billion has been committed, short of the $30 billion pledged. Only one-fifth of climate finance supports adaptation in developing countries, in spite of promises to ‘balance’ it with mitigation funding. Only Switzerland received a ‘pass’ grade in this year’s transparency scorecard. Less than half of committed funds are grants and only two per cent are flowing through the UN, where they could strengthen trust between contributor and recipient nations. It is past time to meet the long-agreed principles: new and additional, predictable, and adequate climate finance.