Incentives to sustain forest ecosystem services: A review and lessons for REDD 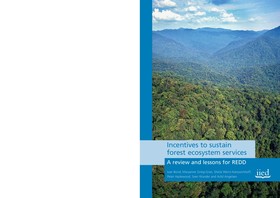 Approximately 17 per cent of global greenhouse gas emissions are caused by land-use change and, in particular, the destruction of tropical forests. Reducing land-use change and forest degradation has been shown as a cost-effective way of slowing carbon emissions compared to other mitigation strategies such as curbing emissions from power stations. Decisions taken at the Conference of the Parties to the UNFCCC in Bali, 2007 opened the possibility for reduced emissions from deforestation and degradation (REDD) payments to become part of the post-Kyoto framework agreement, and for short-term pilot projects. Consequently, the governments of many industrialised countries are announcing significant new funds to tackle climate change.

The Government of Norway, through its International Climate and Forest Initiative, will allocate up to NOK3 billion a year between 2009 and 2012 to mitigate greenhouse gases produced by land-use change. An assessment of the utility of payments for ecosystem services as a tool for REDD was commissioned by the Norwegian Minister for the Environment and International Development to inform the International Climate and Forest Initiative. This document represents a summary of ten papers which made up the assessment.