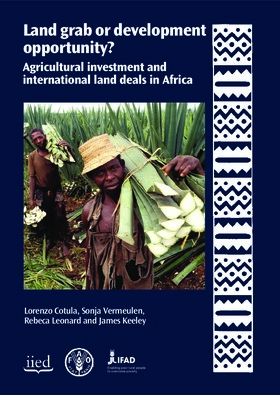 Large-scale acquisitions of farmland in Africa, Latin America, Central Asia and Southeast Asia are making headlines in a flurry of media reports across the world. Lands that only a short time ago seemed of little outside interest are now being sought by international investors by the tune of hundreds of thousands of hectares. And while a failed attempt to lease 1.3 million hectares in Madagascar has attracted much media attention, deals reported in the international press constitute the tip of the iceberg.

Despite the spate of media reports and rare published research, international land deals and their impacts still remain little understood. This report is a step towards filling this gap. The outcome of a collaboration between IIED, FAO and IFAD, the report discusses key trends and drivers in land acquisitions, the contractual arrangements underpinning them and the way these are negotiated, and the early impacts on land access for rural people in recipient countries. While international land deals are emerging as a global phenomenon, this report focuses on sub-Saharan Africa.

This report has been produced under IIED’s Legal tools for citizen empowerment project.