Assessing the costs of adaptation to climate change: A critique of the UNFCCC estimates 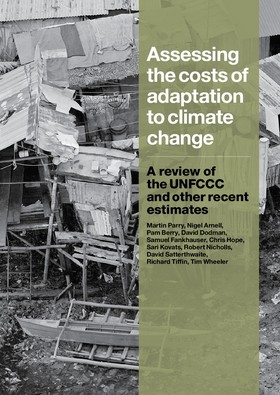 This book takes another look at the costs of adapting to climate change. The estimates for 2030 used by the UN Framework Convention on Climate Change are likely to be substantial under-estimates. Professor Martin Parry and his co-authors look at the estimates from a range of perspectives, and conclude that:

• the current cost assessments do not include some key sectors, such as ecosystems, energy, manufacturing, and retailing
• some of the sectors included have been only partially covered in cost estimates
• the additional costs of adaptation have sometimes been calculated as ‘climate mark-ups’ against low levels of assumed investment.

In some parts of the world, low levels of investment have led to an adaptation deficit, and this deficit will need to be made good by full funding of development, without which the funding for adaptation will be insufficient. Residual damages also need to be evaluated and reported because not all damages from climate change can be avoided. There is an urgent need for more detailed assessments of these costs, including case studies of costs of adaptation in specific places and sectors. This report aims to demonstrate the need for the further and transparent refinement of cost estimates for responding to climate change.