Barbara Ward and the Origins of Sustainable Development 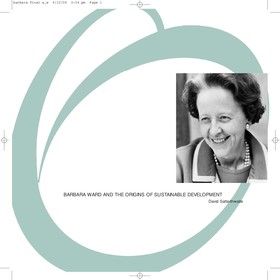 Barbara Ward is remembered as one of the great intellectuals and internationalists of the 20th century. And among the first champions of sustainable development. Time magazine called her one of the 20th century's most influential visionaries. Many of her books such as The Rich Nations and the Poor Nations (1962), Only One Earth (1972) written with René Dubos and The Home of Man (1976) were best sellers, both sides of the Atlantic and published in many different languages. She advised two US presidents and several UK prime ministers; also numerous presidents, prime ministers and foreign ministers in Asia and Africa. The British government made her a Dame and then a life peer (Baroness Jackson of Lodsworth).

In this book, David Satterthwaite describes her life and her works, especially the main themes of her many books. This includes a discussion of her contribution to the formative years of the Sustainable Development agenda and her role in building the International Institute for Environment and Development (IIED). The book also includes personal recollections about Barbara Ward from Maurice Strong, David Runnalls, Sartaj Aziz and Sir Richard Jolly.