Assessing the scale and nature of urban poverty in Buenos Aires 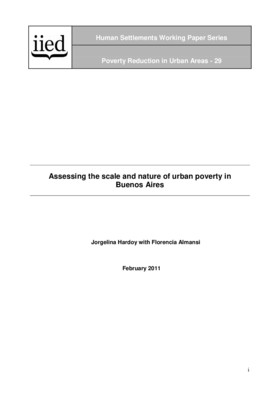 This paper considers the extent to which the indicators used for measuring poverty in Argentina provide an accurate portrayal of poverty in Buenos Aires and inform policies to reduce it. Three points are highlighted. The first is that the two official poverty lines (one for poverty, one for extreme poverty) are unrealistically low, as a large proportion of the population of Buenos Aires live in poverty, facing multiple deprivations, yet according to these poverty lines are not poor. The second is that the unsatisfied basic needs index that was developed as a complement to the income-based poverty lines has helped highlight aspects of deprivation other than inadequate incomes but does not provide the information needed by local governments intent on addressing unsatisified basic needs. The third is that there are many aspects of deprivation associated with inadequate incomes that are not highlighted in official poverty statistics and this helps explain some of the inadequacies in policy responses to poverty. The paper includes detailed data on incomes, expenditures and deprivations from interviews with women living in different informal settlements. None had incomes below the extreme poverty line but all lived in informal settlements and most had difficulties affording sufficient food and keeping their children at school. None could afford to live in a formal settlement.