Migration, local development and governance in small towns: two examples from the Philippines 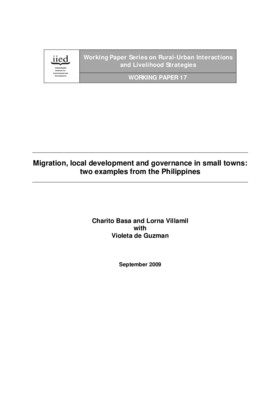 With more than 8 million of its 88 million total population living and working abroad, the Philippines has a long tradition of international migration, both independent and supported by a number of government programmes. Internal migration is also significant and closely linked with regional inequalities in incomes and employment opportunities. A growing number of internal migrants move to smaller towns, which are projected to grow faster than other urban centres in the next two decades. International and internal movements have both benefits and costs for the individual and communities involved. They also present new challenges, especially in small towns where local governance systems are often weak. This paper describes the impacts of migration on two small urban centres in the most economically thriving areas of the country. Remittances from substantial international migration in Mabini, in the Southern Tagalog region, have become an essential part of the local economy, but have also increased social inequalities and done little to improve governance and local economic development. In contrast, Guiguinto, in Central Luzon, has attracted large numbers of internal migrants due to its location close to Metro Manila, as well as to its dynamic economy and the positive role of local government in supporting infrastructure and services.