Rural-urban transformations and the links between urban and rural development 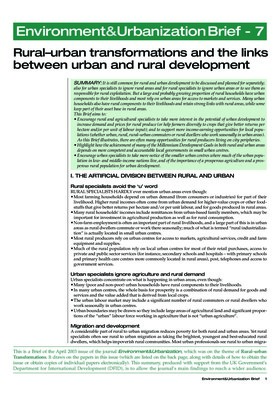 Brief of the April 2003 issue of E&U. It is still common for rural and urban development to be discussed and planned for separately; also for urban specialists to ignore rural areas and for rural specialists to ignore urban areas or to see them as responsible for rural exploitation. But a large and probably growing proportion of rural households have urban components to their livelihoods and most rely on urban areas for access to markets and services. Many urban households also have rural components to their livelihoods and retain strong links with rural areas, while some keep part of their asset base in rural areas. This Brief aims to:

* Encourage rural and agricultural specialists to take more interest in the potential of urban development to increase demand and prices for rural produce (or help farmers diversify to crops that give better returns per hectare and/or per unit of labour input); and to support more income-earning opportunities for local populations (whether urban, rural, rural-urban commuters or rural dwellers who work seasonally in urban areas). As this Brief illustrates, there are often many opportunities for rural producers living on city peripheries.

* Highlight how the achievement of many of the Millennium Development Goals in both rural and urban areas depends on more competent and accountable local governments in small urban centres.

* Encourage urban specialists to take more notice of the smaller urban centres where much of the urban population in low- and middle-income nations live, and of the importance of a prosperous agriculture and a prosperous rural population for urban development.