Using video can be a powerful and engaging way to communicate sustainable development issues. We uploaded more than 100 videos to our YouTube channel during 2018. From animations and interviews with our experts, to speeches and webinars, here are 10 examples that helped us deliver research and information in different ways.

In August, we released two films highlighting initiatives to improve the sustainability of Chinese investments in Africa. As part of a wider effort to reach Chinese and international audiences with messages about good governance and local livelihoods, a company used to developing materials for Chinese markets was commissioned to design and produce them, subtitled in English and Chinese.

James Mayers, director of IIED's Natural Resources research group, explained: "We wanted to raise awareness among the Chinese public about the scale of the Africa-China timber trade and impacts of Chinese investments on African forests, about which they may not be aware. We wanted to show how China's consumption can have a direct impact on how much forest is left in Africa and on local livelihoods. We also wanted to try to help show what good Chinese investment in Africa could look like."

Both films were also published on Tencent, one of the most popular video streaming sites in China (View 'Meet Mr Forest' and 'China's Investment, Africa's Forest' via Tencent). By working with consultants familiar with communication channels and marketing in China, and some paid promotion, these were viewed 360,000 times in the first 24 hours after release.

Videos can be an excellent tool for informing policymakers who are short of time about complex issues. This animation produced in late November explains how governments can use tools such as taxes, penalties and subsidies to support the health of the ocean and protect the livelihoods of people who depend on it. All in under two minutes!

The video brings to life how governments can put these tools to best use – such as introducing penalties to discourage overfishing and harmful practices like dredging, and incentivise positive initiatives, for example by subsidising innovation that protects marine life.

The animation was the first of three planned ahead of an international event this week to discuss how to develop a marine economy that is fair and sustainable.

Dietary diversity – and the value of humour

Video can transport people huge distances in an instant, and provide viewers with connections they might never normally be able to make. At the end of September, a video filmed in Bolivia showed why three local women believe food diversity is so important – while traditional, highly nutritious grains such as cañahua are in danger of being forgotten.

The film – which also highlights the impact that humour can have, with a dog cocking its leg to go to the toilet on one interviewee at one point – emphasises the benefits of ensuring people have more diverse and healthy diets.

In January the video was named among the finalists in the ‘Impact’ category of the Social Impact Media Awards. It was produced by BRANDOUTLOUD for the Hivos and IIED Sustainable Diets for All programme.

Climate finance, the funding to support action on climate change, is growing rapidly – but little of it is reaching locally-led initiatives. IIED estimates less than US$1 in $10 of funding from dedicated climate funds explicitly seeks to support local climate action – but there are some examples of where it’s working, and lessons that can be learned.

IIED is exploring solutions for getting climate finance to local communities, and at the end of last year we produced three case studies of good practice. One of these looked at how the Babacu Fund is delivering support to landless women in some of Brazil’s remotest and poorest municipalities in the northeastern Amazon. These women earn a large part of their livelihoods by harvesting and processing the nuts of the babacu palm tree.

This case study was accompanied by a quite complicated diagram (PDF) illustrating the structure of the fund, and showing how it has been designed to get funding to the local level effectively. So we decided to produce an animation to help explain the diagram, give it context and provide a different way to engage with the case study.

This video is in French; English language subtitles are available via the captions in the YouTube player.

Prior to the UN climate talks in Poland in December, Fatima Athoumani was one of dozens of junior negotiators from vulnerable developing countries who attended a workshop to be briefed on the key issues and negotiating strategies. "The workshop’s mock negotiation sessions were a real eye-opener for me," she said. "I was nervous – it felt like a real negotiation! This hands-on lesson of how the negotiations work in practice was invaluable for improving my skills."

The workshop was part of the European Capacity Building Initiative (ecbi) training and support programme, and the video interview in Katowice, along with the accompanying blog, helped highlight the personal nature of the lessons Fatima took from the exercise.

In 2019 the ECBI programme is planning to follow another junior negotiator with a view to sharing a diary, which will include video footage, of what they have learned and how they’ve put it into practice throughout the year.

The Barbara Ward Lecture, which celebrates IIED's founder, is one of the highlights of the year for IIED. Demand to attend the event is always high, especially when the guest speaker is Gro Harlem Brundtland, the first woman Prime Minister of Norway.

For the last two lectures, we have broadcast a live stream of the lecture, including an introduction by director Andrew Norton and a question-and-answer session with them and IIED trustee chair Rebeca Grynspan, on our YouTube channel.

This enabled hundreds of people unable to attend to watch from the comfort of their home, even in other countries, as Brundtland called for people to speak out against simplistic politics of populism, and highlighted worldwide change and the importance of tackling inequality as part of sustainable development.

A number of video interviews, when collected together in a YouTube playlist, can highlight a range of views that offer a wider or deeper perspective on an issue.

In October 2018, representatives of local communities from across the world involved in efforts to combat the illegal wildlife trade, such as Brisetha Hendricks, of the Ûibasen Twyfelfontein Conservancy in Namibia, shared their experiences at a Community Voices event at London Zoo.

Each interviewee shares their perspective on the need for governments to recognise local communities as equal partners in conserving wildlife.

A walk in the clouds: getting closer to the issues

The most spectacular footage that featured in an IIED film last year was from the Potato Park in Peru, which played host to more than 100 representatives of mountain indigenous peoples from 11 countries.

The film provides a glimpse into a four-day horizontal learning exchange organised to promote knowledge sharing between mountain communities, with a focus on climate change adaptation, seeds and biocultural heritage. It entailed a ‘walking workshop’ – a methodology that can be hard to convey on a page, but can be portrayed in intimate and glorious detail on film, bringing the viewer closer to the issues and making them feel they are part of the exchange.

One of the most impressive, and worrying, speeches at an IIED event in 2018 was given by Debra Roberts at last year’s Development and Climate Days in Katowice, Poland, during the UN climate talks.

Roberts, who co-chairs the IPCC’s working group on impacts and adaptation, concluded her opening address by saying the underlying message to the world of the IPCC’s report on global warming of 1.5˚C earlier that year “was that we have to have urgent and far-reaching action”.

She added: “Global emissions have to peak before 2030 in all the pathways that are compatible with 1.5º” and reach net zero by 2050. The headlines that say 12 years to save the world were wrong. “We don’t have 12 years; in fact we probably have 12 minutes.”

We must change how finance flows urgently says Debra Roberts. We don’t have 12 years, we don’t even have 12 months to deliver this change... we all need to ask ourselves how we are part of the solution... stirring stuff at start of #dcdays18 pic.twitter.com/DKwOybL3cq

The speech kickstarted discussion among participants at the conference, and the video of Roberts, available online by the end of the day, enabled other interested observers around the world to quickly contribute their own views as well.

A seminar shared is knowledge widened

The global nature of IIED’s work, coupled with a desire to engage and connect directly with policymakers and the people carrying out projects, saw 2018 become a year in which we increasingly embraced online webinars.

These were organised for subjects ranging from the promotion of gender equality in the context of conservation policy and practice and how small-scale fisheries can be mainstreamed in national accounts, to supporting farmers in contract farming arrangements.

Each webinar attracted an audience of up to 100 people, but by recording the presentations and question-and-answer sessions and uploading them to IIED’s YouTube channel, the expertise shared during the event can become a resource that is made available to a much wider audience to follow up at their leisure.

A wide and varied resource

These videos are only a selection of the films we hosted during 2018. Watch all of these videos – and many more – on IIED's YouTube channel.

We're also using videos to introduce our experts. Interviews can help our staff explain their work and why particular aspects of it matter, alongside providing a more human side to the interviewee. Over the course of the last year, as part of efforts to improve our staff profile pages, we have also been compiling collections of video interviews with our researchers and making them more readily available.

Best of the year 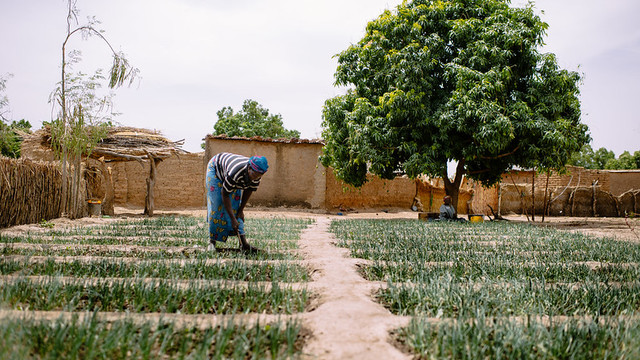 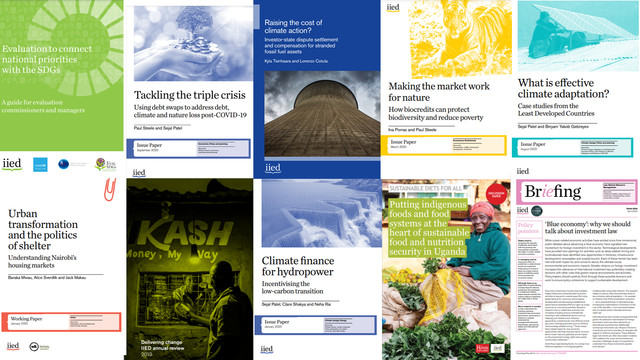 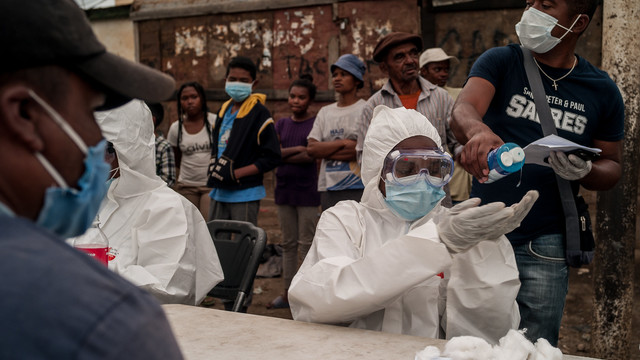 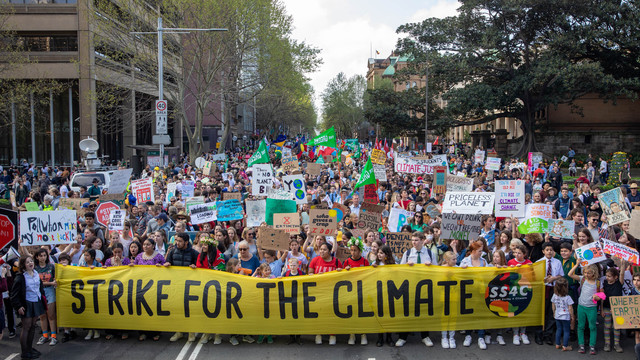