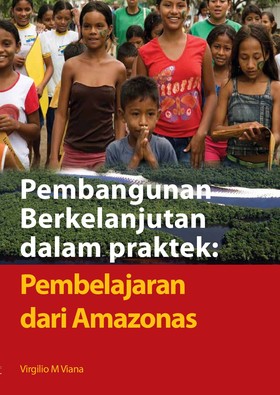 Historically, the Amazon region has taken a ‘frontier’ approach to development that has destroyed forests. From 2000-2002, Professor Virgilio Viana worked with IIED to explore options for more forest-friendly forms of development. The Governor of Amazonas subsequently appointed Viana as the first ever Secretary for Environment and Sustainable Development. Viana was able to make the case for and implement several options, which were marked out by being scientifically based, simple to understand, and attractive to many stakeholders. For example, the Bolsa Floresta scheme – where forest households are rewarded with monthly payments into credit card accounts for practising ‘farming without fire’ – is conserving carbon, biodiversity and more.

This book is the result of a short sabbatical at IIED to reflect on this experience, telling the story of Bolsa Floresta, many other schemes, and of improving the mandates of environmental institutions so that they become sustainable development agents. The book closes with a proposal for a National Project for the Amazon, based on experience in Amazonas State. IIED believes that the ideas developed and honed over the last few years are both timely and inspiring – both for Brazil and for countries further afield, as they now search for new ‘green economies’.