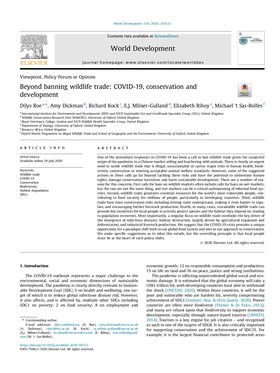 One of the immediate responses to COVID-19 has been a call to ban wildlife trade given the suspected origin of the pandemic in a Chinese market selling and butchering wild animals. There is clearly an urgent need to tackle wildlife trade that is illegal, unsustainable or carries major risks to human health, biodiversity conservation or meeting acceptable animal welfare standards. However, some of the suggested actions in these calls go far beyond tackling these risks and have the potential to undermine human rights, damage conservation incentives and harm sustainable development. There are a number of reasons for this concerns. First calls for bans on wildlife markets often include calls for bans on wet markets, but the two are not the same thing, and wet markets can be a critical underpinning of informal food systems. Second, wildlife trade generates essential resources for the world’s most vulnerable people, contributing to food security for millions of people, particularly in developing countries. Third, wildlife trade bans have conservation risks including driving trade underground, making it even harder to regulate, and encouraging further livestock production. Fourth, in many cases, sustainable wildlife trade can provide key incentives for local people to actively protect species and the habitat they depend on, leading to population recoveries. Most importantly, a singular focus on wildlife trade overlooks the key driver of the emergence of infectious diseases: habitat destruction, largely driven by agricultural expansion and deforestation, and industrial livestock production. We suggest that the COVID-19 crisis provides a unique opportunity for a paradigm shift both in our global food system and also in our approach to conservation. We make specific suggestions as to what this entails, but the overriding principle is that local people must be at the heart of such policy shifts.